The Roman Catholic Pope,   HIS HOLINESS, POPE FRANCIS I 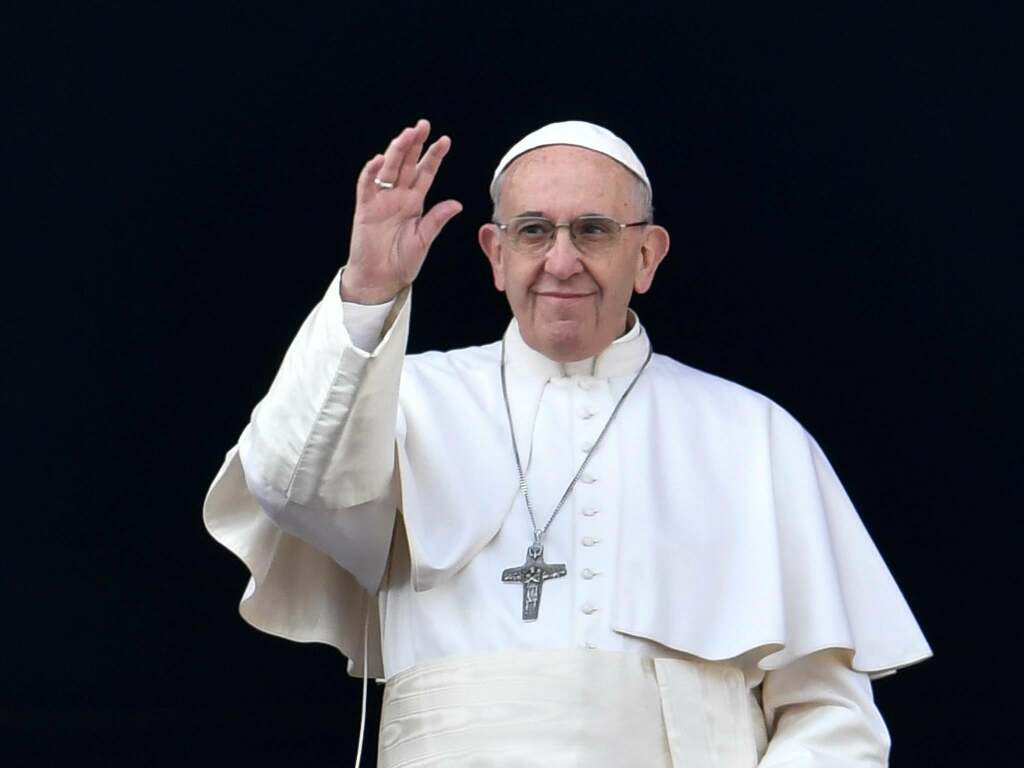 Jorge Bergoglio was born in Buenos Aires, one of the five children of an Italian railway worker and his wife. After studying at the seminary in Villa Devoto, he entered the Society of Jesus on March 11, 1958. Bergoglio obtained a licentiate in philosophy from the Colegio Máximo San José in San Miguel, and then taught literature and psychology at the Colegio de la Inmaculada in Santa Fe, and the Colegio del Salvador in Buenos Aires. He was ordained to the priesthood on December 13, 1969, by Archbishop Ramón José Castellano. He attended the Philosophical and Theological Faculty of San Miguel, a seminary in San Miguel. Bergoglio attained the position of novice master there and became professor of theology.

Impressed with his leadership skills, the Society of Jesus promoted Bergoglio and he served as provincial for Argentina from 1973 to 1979. He was transferred in 1980 to become the rector of the seminary in San Miguel where had had studied. He served in that capacity until 1986. He completed his doctoral dissertation in Germany and returned to his homeland to serve as confessor and spiritual director in Córdoba.

Bergoglio succeeded Cardinal Quarracino on February 28, 1998. He was concurrently named ordinary for Eastern Catholics in Argentina, who lacked their own prelate. Pope John Paul II summoned the newly named archbishop to the consistory of February 21, 2001 in Vatican City and elevated Bergoglio with the papal honors of a cardinal. He was named to the Cardinal-Priest of Saint Robert Bellarmino.

As Cardinal, Bergoglio became known for personal humility, doctrinal conservatism and a commitment to social justice. A simple lifestyle has contributed to his reputation for humility. He lives in a small apartment, rather than in the palatial bishop's residence. He gave up his chauffeured limousine in favor of public transportation, and he reportedly cooks his own meals.

Upon the death of Pope John Paul II, Bergoglio, considered papabile himself, participated in the 2005 papal conclave as a cardinal elector, the conclave that selected Pope Benedict XVI. A widespread theory says that he was in a tight fight with Ratzinger until he himself adviced crying[clarification needed] not to be voted.[2] Earlier, he had participated in the funeral of Pope John Paul II and acted as a regent alongside the College of Cardinals, governing the Holy See and the Roman Catholic Church during the interregnum sede vacante period. Cardinal Bergoglio remains eligible to participate in conclaves that begin before his 80th birthday on December 17, 2016.

During the 2005 Synod of Bishops, he was elected a member of the Post-Synodal council. Catholic journalist John L. Allen, Jr. reported that Bergoglio was a frontrunner in the 2005 Conclave. An unauthorized diary of uncertain authenticity released in September 2005[3] confirmed that Bergogolio was the runner-up and main challenger of Cardinal Ratzinger at that conclave. The purported diary of the anonymous cardinal claimed Bergoglio received 40 votes in the third ballot, but fell back to 26 at the fourth and decisive ballot.

On November 8, 2005, Bergoglio was elected President of the Argentine Episcopal Conference for a three-year term (2005–2008) by a large majority of the Argentine bishops, which according to reports confirms his local leadership and the international prestige earned by his alleged performance in the conclave. He was reelected on November 11, 2008. 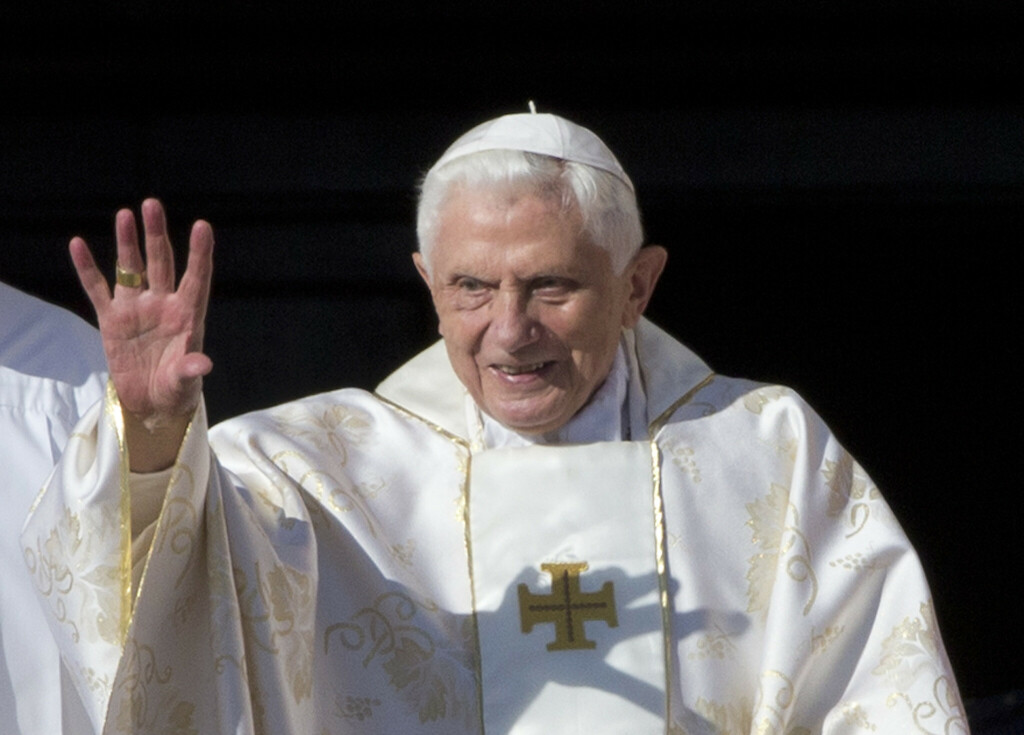 Cardinal Joseph Ratzinger, Pope Benedict XVI, was born at Marktl am Inn, Diocese of Passau (Germany) on 16 April 1927 (Holy Saturday) and was baptised on the same day.

His father, a policeman, belonged to an old family of farmers from Lower Bavaria of modest economic resources. His mother was the daughter of artisans from Rimsting on the shore of Lake Chiem, and before  marrying she worked as a cook in a number of hotels.

He spent his childhood and adolescence in Traunstein, a small village near the Austrian border, thirty kilometres from Salzburg. In this environment, which he himself has defined as "Mozartian", he received his Christian, cultural and human formation.

His youthful years were not easy. His faith and the education received at home prepared him for the harsh experience of those years during which the Nazi regime pursued a hostile attitude towards the Catholic Church. The young Joseph saw how some Nazis beat the Parish Priest before the celebration of Mass.

It was precisely during that complex situation that he discovered the beauty and truth of faith in Christ; fundamental for this was his family’s attitude, who always gave a clear witness of goodness and hope, rooted in a convinced attachment to the Church.

During the last months of the war he was enrolled in an auxiliary anti-aircraft corps.

From 1946 to 1951 he studied philosophy and theology in the Higher School of Philosophy and Theology of Freising and at the University of Munich.

He received his priestly ordination on 29 June 1951.

A year later he began teaching at the Higher School of Freising.

In 1953 he obtained his doctorate in theology with a thesis entitled "People and House of God in St Augustine’s Doctrine of the Church".

Four years later, under the direction of the renowned professor of fundamental theology Gottlieb Söhngen, he qualified for University teaching with a dissertation on: "The Theology of History in St Bonaventure".

After lecturing on dogmatic and fundamental theology at the Higher School of Philosophy and Theology in Freising, he went on to teach at Bonn, from 1959 to1963; at Münster from 1963 to 1966 and at Tübingen from 1966 to 1969. During this last year he held the Chair of dogmatics and history of dogma at the University of Regensburg, where he was also Vice-President of the University.

From 1962 to 1965 he made a notable contribution to Vatican II as an "expert"; being present at the Council as theological advisor of Cardinal Joseph Frings, Archbishop of Cologne.

His intense scientific activity led him to important positions at the service of the German Bishops’ Conference and the International Theological Commission.

In 1972 together with Hans Urs von Balthasar, Henri de Lubac and other important theologians, he initiated the theological journal "Communio".

On 25 March 1977 Pope Paul VI named him Archbishop of Munich and Freising. On 28 May of the same year he received episcopal ordination. He was the first Diocesan priest for 80 years to take on the pastoral governance of the great Bavarian Archdiocese. He chose as his episcopal motto: "Cooperators of the truth". He himself explained why: "On the one hand I saw it as the relation between my previous task as professor and my new mission. In spite of different approaches, what was involved, and continued to be so, was following the truth and being at its service. On the other hand I chose that motto because in today’s world the theme of truth is omitted almost entirely, as something too great for man, and yet everything collapses if truth is missing".

Paul VI made him a Cardinal with the priestly title of "Santa Maria Consolatrice al Tiburtino", during the Consistory of 27 June of the same year.

John Paul II named him Prefect of the Congregation for the Doctrine of the Faith and President of the Pontifical Biblical Commission and of the International Theological Commission on 25 November 1981. On 15 February 1982 he resigned the pastoral governance of the Archdiocese of Munich and Freising. The Holy Father elevated him to the Order of Bishops assigning to him the Suburbicarian See of Velletri-Segni on 5 April 1993.

He was President of the Preparatory Commission for the Catechism of the Catholic Church, which after six years of work (1986-1992) presented the new Catechism to the Holy Father.

On 6 November 1998 the Holy Father approved the election of Cardinal Ratzinger as Vice-Dean of the College of Cardinals, submitted by the Cardinals of the Order of Bishops. On 30 November 2002 he approved his election as Dean; together with this office he was entrusted with the Suburbicarian See of Ostia.

In 1999 he was Special Papal Envoy for the Celebration of the XII Centenary of the foundation of the Diocese of Paderborn, Germany which took place on 3 January.

Since 13 November 2000 he has been an Honorary Academic of the Pontifical Academy of Sciences.

In the Roman Curia he has been a member of the Council of the Secretariat of State for Relations with States; of the Congregations for the Oriental Churches, for Divine Worship and the Discipline of the Sacraments, for Bishops, for the Evangelization of Peoples, for Catholic Education, for Clergy and for the Causes of the Saints; of the Pontifical Councils for Promoting Christian Unity, and for Culture; of the Supreme Tribunal of the Apostolic Signatura, and of the Pontifical Commissions for Latin America, "Ecclesia Dei", for the Authentic Interpretation of the Code of Canon Law, and for the Revision of the Code of Canon Law of the Oriental Churches.

Among his many publications special mention should be made of his "Introduction to Christianity", a compilation of University lectures on the Apostolic Creed published in 1968; "Dogma and Preaching" (1973) an anthology of essays, sermons and reflections dedicated to pastoral arguments.

His address to the Catholic Academy of Bavaria on "Why I am still in the Church" had a wide resonance; in it he stated with his usual clarity: "one can only be a Christian in the Church, not beside the Church".

His many publications are spread out over a number of years and constitute a point of reference for many people specially for those interested in entering deeper into the study of theology. In 1985 he published his interview-book on the situation of the faith (The Ratzinger Report) and in 1996 "Salt of the Earth". On the occasion of his 70th birthday the volume "At the School of Truth" was published, containing articles by several authors on different aspects of his personality and production.